I suppose I should begin by confessing that I’ve set myself a challenge – in a very short time I will be attempting a PB cycle distance. I’m not taking part in an event or asking for sponsors, nor am I really making it all that public (blog post aside…) but I have decided to set a personal goal to achieve a particular ride in good time for no other reason than to impress myself. In preparation for said challenge, I’ve been trying to improve on my general fitness and get a few distance rides in when I can, which to be honest has proved more tricky than I thought due to a particularly busy summer.

I should also confess that when I first bought my bike a few years ago, I could barely cycle to the end of my street, such was my total lack of fitness. In fact, we once hired bikes in Skye on holiday and by the time we’d cycled them to the holiday cottage at the top of the hill, we were ready to take them back. However since then I’m pleased to say the situation has improved and I can now actually cycle like a normal person without panting like a hot dog and flailing about on the saddle.

Most recently I planned a practice day ride to see if I was kidding myself or if I have in fact built up some level of basic ability. Since I am not an experience road cyclist, I was on the hunt for a route that was a suitable distance but which incorporated a large proportion of cycle path. This is where my good friends at Sustrans outdo themselves – their maps are particularly useful for a leisure cyclist like me because they show the type of path or road you will be on. They also cover a whacking great distance and fold up to a nifty back-pocket size.

After much deliberation and uttering of “just pick one” from my other half, I decided on a section of the Fife Coastal Path to the National Trust for Scotland entrusted Culross (it’s a very pretty little place if you haven’t ever been). From my side of the Forth, a sensible place to start the route seemed to be the Kelpies and so that’s effectively where I began, once I’d cycled to them.

The Kelpies – with a convenient passer-by for scale

The Kelpies are one of Scotland’s newest landmarks (not quite the baby since the Queensferry Crossing opened this week) and they are a rather spectacular sight, especially from the M9 motorway in the summer when they appear around an eastbound bend behind some trees. They’re a landmark dedicated to the industrial history of the canal and the region, and judging by the sheer number of visitors they attract they are proving to be very popular. It’s just a shame you can’t climb up the inside, but then I suppose that might take away some of their impressive mystery.

Anyway, it’s from the base of these giant metal horses that I started my ride, ducking underneath the aforementioned motorway and joining a minor road out of Grangemouth. From there, it’s a nice flat cycle since the road cuts across a flood plain for the Forth to Skinflats – one of the more peculiarly named villages round this part and I’ve always meant find out how it came to be called that. From Skinflats, there is a dedicated cycle path towards Airth and then north towards Kincardine so cyclists are perfectly safe away from the busy motorway traffic (and the motorists are safe from the amateur cyclists).

Now obviously to get from one side of the Forth to the other, a bridge is involved. There are two neighbouring bridges at this narrower stretch of water, the Clackmannanshire Bridge which is possibly one of the singularly least interesting bridges you will ever see, and the Kincardine Bridge which is a muckle great black metal contraption and that always makes me think of the American Midwest for some reason. It used to be a swing bridge that rotated to let large boats pass through, but I don’t think it has swung in my lifetime.

The bridge was my only real point of concern for two reasons – the first was that  I didn’t want to be among traffic on a bridge because there is little space for either party to move. My handy Sustrans map told me that there was a path across the bridge so that put those fears to bed. The second reason was that I am not a lover of heights, and while the Kincardine bridge is not as high as it’s younger brother (sister? Are bridges like boats) downstream, the thought of getting half way across, looking down through the railing and and suddenly finding myself wobbling about on two wheels in a state of minor vertigo did not sit well with me. However, there was nothing for it, and over the bridge I went in one swift “just-pedal-really-fast-and-only-look-forward” motion.

Going over was fine and over fairly swiftly ( coming back was not but we’ll return to this later) and I stopped on the other side for some water and a rest. And a selfie. Of course.

Just off the bridge, you can join the Fife Coastal Path which is a dedicated and maintained path that runs – you guessed it – along the coast of Fife. This first stretch along the Forth might not be the most picturesque I grant you; it incorporates a lot of industrial space on both sides and just along from Kincardine it passes an enormous power station. This is in fact the only part of the cycle where I lost the path because it becomes an access road for a short distance, with another path running off at a tangent towards the water. I’ll admit I had a moment of “hold on, this doesn’t look right” as I watched this new rogue path career off to nowhere.

Beyond the power station you join a shared use path right along to Culross. On the day I cycled, I shared the use of said path with remarkably few people which was peculiar since it was a public holiday, but perhaps had something to do with the impending rain clouds coming over from Stirling. The path runs adjacent to the road for the most part, with a mixture of farmland and woodland on the other side.

The wheels at Culross

The first place you come to really on this path is Culross, which as I say is a pretty heritage village that’s looked after in part by the NTS. For those of you who don’t know, it’s pronounced “Cooruss”, not “Kulross” which is a mistake I made about seventeen years ago that certain people won’t let lie. I stopped here for a snack and a break – there’s a cafe and a few shops to wander about if you’re so inclined. And a palace, because we’re in Scotland.

It didn’t take me quite as long to reach Culross as I thought though, so before turning back I continued a little further along the path to what looks like a big grassy hill that juts out into the Forth. As I crossed over the single track railway line, a sign told me this was Preston Island. It turns out it’s an artificial island that once housed a coal mine that was used to produce salt – that was my “something new I’ve learned today” moment.

There’s a path all the way around this small island and once you get to the north side you have a nice view of the three Forth bridges. The path then circles round to rejoin the start at the railway crossing.

It was then a hasty-as-can-be retreat since those looming rain clouds caught up with me and it was something of a damp ride back. I must say, riding across the Kincardine Bridge in wind and rain on a path considerably narrowed by roadwork barriers was not the most fun I’ve ever had…

I came back exactly the way I came, and by the time I made it back to the rain soaked Kelpies I decided to reward myself with a hot chocolate. I covered just a little over thirty miles, which was no mean feat in my book. 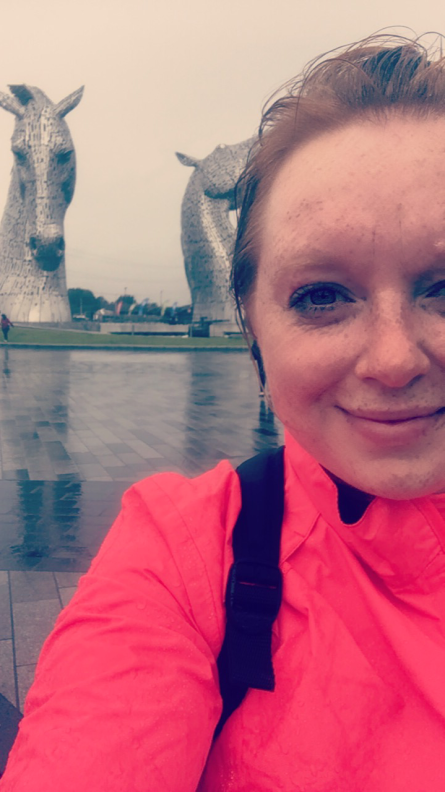 Here I am, rain soaked after 30 miles

I’m available for author events and story telling sessions so if you would like me to take part in something at your school, nursery, kid’s club, bookshop, festival or any other booky event please contact me!

There is a contact form at the bottom of this page…

Check out the blog pages for updates about where Ruan’s been and who he’s met as he starts his travels!