Right, having spent an inordinate amount of time trying to format a blog for the first time in my life, it’s probably time to write something on it. And so I thought, what better place to start than where the story of Ruan began and how he came into being on bookshelves around the country.

If you’ve read the ‘About’ part on here you’ll know that, in addition to me owning a very cute puppy (useful information to you, I’m sure), I also have worked as a bookseller and in publishing for a while now, so books are and have long been a big part of my life. I also have a degree in English Lit, and while this doesn’t necessarily help in writing a story about a naughty squirrel for seven-year-olds, it’ll give you an idea about just how much I like books. As would my downstairs-loo-come-library…

So the story all began with a squirrel – one of Scotland’s best known and most loved animals and one in great need of protection and awareness.  I’m sure for some the first thing that comes to mind when thinking about squirrels is their timid and shy nature, given the fact that they’re always scurrying up a tree while you hastily try to get the camera out. However, when I think of squirrels, I think of one particularly mischievous one that I met as a child who managed to sneak into the house, rifle through the food cupboards and make off half an apple core, a crust of bread and the remnants of whatever was in a selection of chocolate wrappers we later found strewn across the floor.

So I decided that whatever else you might think about red squirrels, mine was going to be a bit naughty. He’s in amongst his friends in the forest, without all those pesky people rustling about below. But what misadventures could happen upon a Scottish red?

There were in fact two stories about Ruan to begin with. I wrote a couple of ‘bare-bones’ manuscripts which set out the basic flow of the story, the characters involved, the type of language that would be used and so on, and gave them to my publisher. It was then decided (and rightly so) that Ruan’s whistle-stop tour of the country was the way to go.

From there it was time for me to start fleshing out the bones… and drafting the story. It doesn’t sound that difficult for a book with thirty pages but the fewer words you have to tell a story, often the more difficult it is. 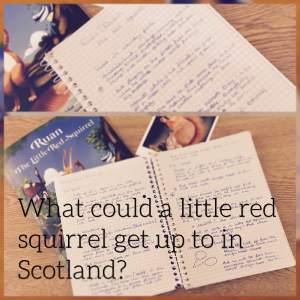 Fleshing out the story…

To help me visualise how the book might all come together, like all good students of a new topic I did some research about my subject matter to try to incorporate as many natural characteristics as possible. This also helped me put together some word clouds for phrases to use in the story.

Knowing the pagination of a standard children’s picture flat, I also planned around how the book could be illustrated – what would the key image for the action on the page be? Who would the reader see, and what would they be doing? Where were the page breaks, and which would be double spreads?

Manuscript submissions for the publisher

After more than a few drafts, word changes, character name ideas, destinations dropped and picked up, I rounded up the final draft of the story into some lovely neat word documents (no one wants to decipher the scrawl in notebooks). The story was set out in the same pagination as the book was intended, so it read just like it would for a child. For each page I described what I envisaged the illustrations would be, like a little story-board in words.

These manuscripts (fancy word for my typed up story) were then submitted to the good people at Forth, and fortunately for me they were well received.

I spied a brief smile upon first reading – this was one of the best things ever.

Once I had given the story its final edit, off it went to Rowena to work her magic on bringing Ruan’s world to life in glorious technicolour. She did an absolutely marvellous job. 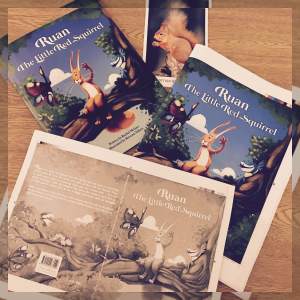 The rest, as they say, is history. With the words and pictures in place, the presses rolled and my beautiful book was born.

I’m available for author events and story telling sessions so if you would like me to take part in something at your school, nursery, kid’s club, bookshop, festival or any other booky event please contact me!

There is a contact form at the bottom of this page…

Check out the blog pages for updates about where Ruan’s been and who he’s met as he starts his travels!